The season of love in figure skating continues! The happy owner of the engagement ring this time was the beautiful representative of ice dancing Alexandra Stepanova. Unlike her colleague Victoria Sinitsina, she did not receive a marriage proposal from partner Ivan Bukin. Although many fans have long dreamed of marrying the guys, Sasha’s heart turned out to be occupied by a completely different young man.

In addition to Bukin, the skater was also credited with an affair with another skater, classmate Igor Eremenko. But neither passionate dances with Bukin, nor joint photos with Eremenko confirmed the wild fantasies of the fans.

Sasha’s boyfriend did not need skates to win the beauty’s heart. However, he called her to marry right on the ice: he collapsed on his knee and moved his beloved to tears.

“Conservatism is the reality of figure skating.” How masterpieces are created on ice

The constant partner on the ice, but not in life

Alexandra Stepanova was born in St. Petersburg in a family of amateur athletes. The girl’s mother played volleyball in her youth, and her father went in for speed skating, but due to an injury, he could not reach a serious level. They brought their daughter to the skating rink at the age of four with a clear desire to grow an athlete out of her. When Sasha was seven years old, the whole family moved to Moscow, where soon serious changes took place in the career of a little skater.

The growing Sasha was getting worse and worse at jumping, but she rode at high speed and showed miracles of artistry. Then from a single look, she switched to dancing on ice. They didn’t look for a partner for long: a pretty girl attracted the attention of the son of the famous figure skater Andrei Bukin, Ivan, and they got into a pair. And a year later, the new duet got into the Russian national team.

Sasha went through many trials with Vanya. And a severe back injury, due to which she could not train for 2.5 months, and an insulting non-admission to the Olympics in Pyeongchang, and fierce competition before the Games in Beijing, when the young duet of Diana Davis and Gleb Smolkin was gaining momentum with might and main.

Naturally, all the difficulties brought the guys very close, and they found almost family relations. But it was related, and not love, as the fans thought for a long time.

Only the appearance of Bukin’s son from the choreographer Alena Samarskaya dispelled the belief that Sasha and Vanya are a couple only on ice, and not in life. “It was hard to get through it.” Why Stepanova and Bukin were not allowed to the 2018 Olympics

“Our feelings didn’t coincide in time”

Sasha and Vanya actually had chances to become a couple in life. They even fell in love with each other, but, alas, their feelings diverged in time. The first notes of love originated with Sasha. This happened in her youth, but she hid her sympathy for her partner, and later all feelings faded away.

But Ivan, on the contrary, after a couple of years decided to win Sasha’s heart. He approached the matter very romantically: he gave her 181 roses when they performed at a show in Korea. The girl appreciated the efforts of the guy, but she could not reciprocate. She was sorry to upset Vanya, and then it was embarrassing to ride together, but you can’t command her heart. “But at that time he only treated me as a partner. And then time passed, I cooled down. And then Ivan decided to give me a huge bouquet of roses and confess his love. To be honest, I felt regret at that moment that our feelings did not coincide in time. Then there was tension in training, but now it’s all in the past, ”Stepanova told Express Gazeta. “We were angry, but we didn’t throw skates.” Bright interview with figure skaters Stepanova and Bukin

“When love lives, no words and microphones are needed”

Love story with Ivan Bukin did not take place in the life of Alexandra Stepanova. But another took place: outside the rink and without the close attention of the public. The fans managed to see only its culmination: a spectacular marriage proposal in the ice show “Champions” by Ilya Averbukh.

For Sasha, everything happened unexpectedly. But Averbukh participated in the preparation of the surprise and carefully hid it from the skater. When the hour “X” came in the final exit of all athletes to the audience, Ilya made a mysterious speech.

“I didn’t think that there would be that moment that will happen now. But this flight of stars is all about love. Let love live! – Averbukh proclaimed in front of the audience. 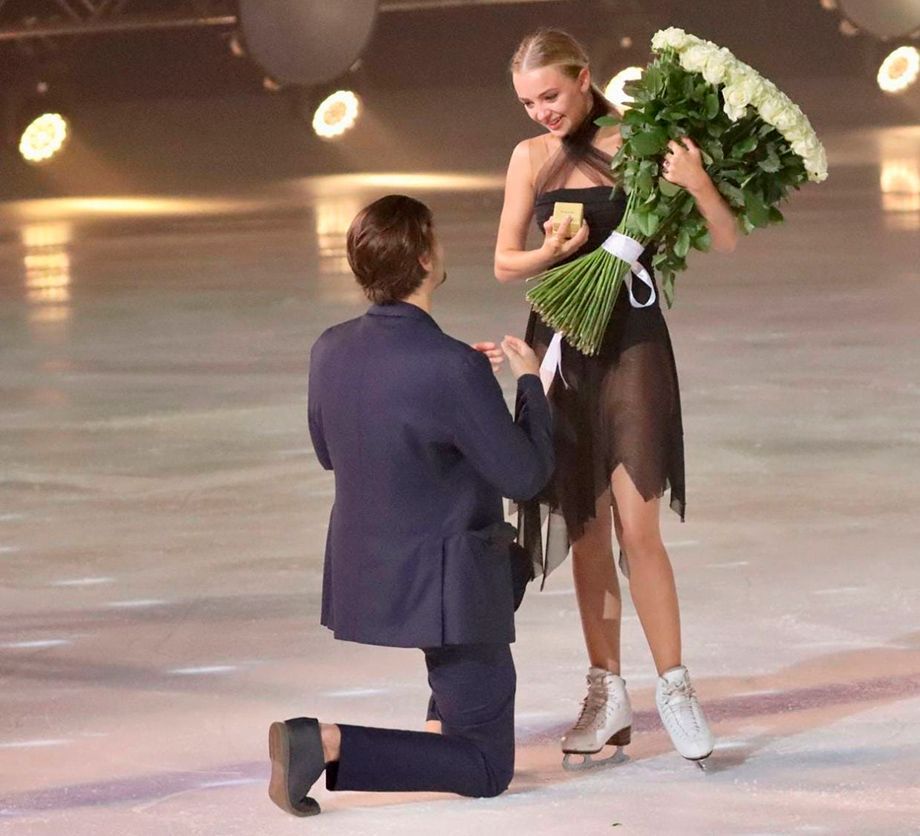 Photo: Social networks of fans of the duet Stepanova / Bukin

After the words of Averbukh, an unknown young man came out onto the ice with a chic bouquet of white roses and went to Alexandra, who was already riding towards him with tears of happiness. The couple hugged tightly and kissed, hiding from the attentive glances of those around them with a bouquet. The girl’s chosen one softly whispered something in her ear, and then took out the ring and knelt down on one knee.

Under the enthusiastic cries of the public, it was not audible that the lovers were talking to each other. But Sasha took the ring and, together with her fiancé, rejoined the rest of the skaters. Ivan Bukin, by the way, was very happy for his partner. But most of all, Sasha’s engagement was celebrated by Evgenia Medvedeva and Anna Shcherbakova. Zhenya and Anya were literally jumping for happiness! They liked the romantic proposal very much.

The audience also shared this wonderful moment with pleasure and showered Sasha with their favorite applause.

“When love lives, I think no words and microphones are needed here. Happiness!” – said Averbukh and gave a signal to the athletes to leave the bride and groom.

The skaters passed the final lap of honor to the famous Soviet song “We wish you happiness!” All this time Alexandra Stepanova wept touchingly. Eye-catching! The most beautiful figure skaters at the Olympics are in ice dancing

Who is Sasha’s mysterious fiance? First, the young man was mistaken for the figure skater Igor Eremenko, who trains with her and Bukin in the same group. It seemed logical, because she often appeared in his company and rested with him. However, they were not suspected of an imminent wedding. The passion that was going on between Sasha and Vanya at competitions and ice shows was not observed with Eremenko. And indeed: Igor sincerely congratulated the girl on social networks as soon as he found out about the engagement.

Sasha, Vlad! I love, love and appreciate! Incredibly happy for you,” Eremenko wrote on his social networks.

The true soulmate of the skater turned out to be Vlad Malinov. Not a skater, but the nephew of Svetlana Sokolovskaya, the coach of the Olympic champion in the team of Mark Kondratyuk.

How Sasha and Vlad met, history is silent. But Vlad was extremely lucky that she would become his wife. An athlete, a beauty and just a charming and kind girl – Sasha has always been considered one of the most enviable brides in figure skating.

And in a wedding dress, she will definitely strike everyone on the spot!