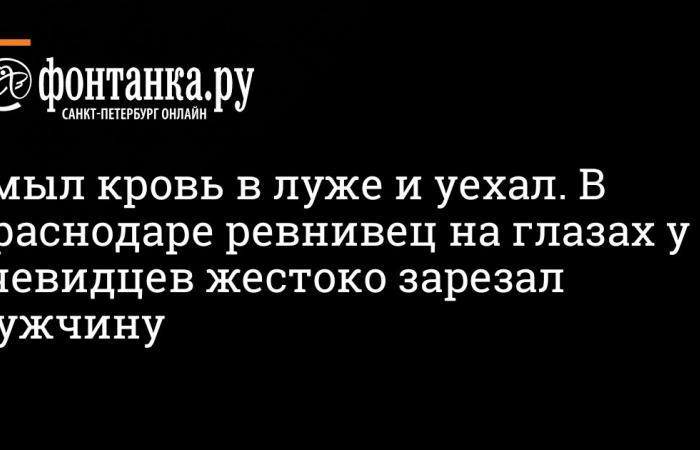 Small street in Krasnodar. On the afternoon of September 13, a brutal murder took place here, in front of eyewitnesses. The tragedy was filmed by eyewitnesses.

In a video posted on social media, the driver of a car with license plates of the Republic of Dagestan can be seen stabbing an opponent at least 4 times. The victim falls to the ground, the onlookers try to stop the attacker with screams, but this turns out to be impossible. The man, in front of witnesses, makes another blow to the neck of a man already lying on the ground, and then gets into the car and leaves.

According to 93.RU, the victim is 49 years old. He was delivered to KKB No. 1 after the accident. The man had multiple wounds to his face and body. The injuries were incompatible with life. Death was recorded around 15:30.

The police later detained the 50-year-old assailant who tried to escape. A hunting knife was found in his car. According to the publication, jealousy for the suspect’s wife led to the tragedy. The victim and attacker lived several blocks apart.

According to eyewitnesses, the car first hit a man on the sidewalk. After that, the driver came out of the car with a knife and attacked the opponent.

“He didn’t look at people at all, as if he was under something or in a state of passion. Then he washed away the blood in a puddle and left, ”a witness to the tragedy told 93.RU.

The suspect’s car had to be stopped with a police chase. It is noted that law enforcement officers managed to block the car around 15:00. “Ford” was driving in the opposite lane and crashed into a traffic police car.